Om-ing for the Gold: What to Know About Competitive Yoga

Om-ing for the Gold: What to Know About Competitive Yoga

Like it or not, some yogis are taking their practice from the studio to the stage.

When Joseph Encinia first heard the words “yoga” and “competition” in one sentence, he laughed. “I do yoga to relax, to feel my own mind and body, and to not worry about anything else,” he says. Not to “win.”

But Encinia, a 19-year-old in Dallas at the time, didn’t want to miss out on a road trip with his friends to Austin, Texas, where a regional yoga competition was being held in 2005. Plus, as a formerly overweight kid who was diagnosed with rheumatoid arthritis and suffered a heart attack at age 13, he had never been able to play more traditional sports like his twin brother. Perhaps this was his chance to flex his competitive muscle.

“I wanted to give it a shot,” remembers Encinia, who had only just begun practicing yoga that year.

So he signed up for the competition, which, like most, involved taking the stage for about three minutes to perform several poses – some obligatory postures; some left to competitors’ choice. He and others were judged by a panel based on measures such as balance, flexibility and strength.

“I fell flat on my face, I had the nervous sweats, I thought, ‘What am I doing up here?'” he remembers. But afterward, he felt so accomplished, he wanted to do it again. “The after-feeling was what made it grow for me,” says Encinia, noting that the atmosphere was more supportive than competitive. He went on to win the National Yoga Asana Championship four years later, in 2009, and is now a full-time instructor and president of the board of the United States Yoga Federation, the organization also known as USA Yoga that hosts yoga competitions, in New York City.

“We’re trying to change the nature of what people consider a sport,” says Encinia, now 30. “It’s something that takes a lot of effort mentally and physically.”

Yoga competitions have been gaining traction in the U.S. since the early 2000s, but they have a much longer history in India, Encinia says. While the events are rooted in the Bikram – a style of hot yoga – tradition (USA Yoga was founded by Bikram’s founder’s wife), they now encompass a variety of methods. “This is just to unify all these yoga disciplines through one activity,” Encinia says.

“Yoga is going to be in sports whether people like it or not,” says Joseph Encinia, president of USA Yoga, which hosted this regional competition in New York in January. (Jens Look)

Unlike many other athletic competitions, the crowd is silent, not rowdy; and the competitors aim for stillness, not speed. “It requires complete control of the breath and the mind,” explains Encinia, who compares the competitions’ judging to gymnastics, form to bodybuilding and grace to dance. “Sport doesn’t always have to be violent or competitive,” he says, “It can be beautiful.”

But not all yoga practitioners and instructors agree that the practice should be considered a sport or involve competition. Here’s what some of them say about yoga competitions’ pros and cons for individuals – and the practice of yoga overall:

Pro: They can push you to be your best.

Just one week after first trying yoga in 2005 on a whim, Encinia’s joint pain and stiffness lessened. Within two years, he had lost 50 pounds and went off all medication. “It became my medicine,” Encinia says. Taking the practice competitive, he found, was the next step to becoming his healthiest. “It was a lifestyle change,” he says, noting how he had to improve his diet and self-discipline even further.

Chris Fluck, a Bikram yoga instructor in Philadelphia who doesn’t compete, compares it to training for a race like a marathon. “A marathon may not be the best thing for you, but you set the goal and it holds you accountable, and I think that’s a powerful thing.” Holding poses on stage in front of people can also push you mentally, Fluck adds. “[Some competitors] overcome this fear, and it’s really gratifying.” For most, he says, it’s a bucket-list item they do once and move on.

Con: They can push you too far.

On the flip side, competitions can stretch people beyond their limits – both mentally and physically. “There’s a saying: ‘Where competition begins, health generally ends,'” says Fluck, who worries both about competitors and everyday yogis injuring themselves due to the influence of competitions. “My big issue is how [competitive postures have] bled into the regular standard yoga class, where we’re trying to teach people of all walks of life,” he says. Non-competitiors can also begin to feel inadequate if they don’t realize it takes a certain body type and intensive training to achieve advanced poses glorified on social media, adds Giulia Pline, a yoga instructor in New York City. “If you’re feeling bad about your own body or practice … then maybe it’s not good,” she says.

For Amanda Baisinger, a New York Regional Asana champion, taking her practice competitive started as a personal challenge. “I wanted to conquer my fear,” she remembers. But once she started placing in events, her focus switched from being well to being the best. She trained year-round and intensely for months leading up to competitions, at the expense of other goals. “It became too much,” Baisinger says. “My life got really out of balance.” She has since stopped competing, but still instructs in New York City, where she also teaches music and is a new mom.

As Meg Carlough Kudrik, a yoga instructor and co-founder of House of Jai Yoga in New York City, puts it, yoga “should feed your body instead of your ego.” 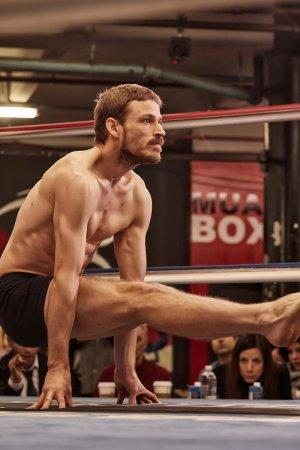 Pro: They can inspire people to begin yoga or improve their practice.

“Whatever brings you to practice is lovely, so on that level, I’m fully on board with it,” Kudrik says. Just like watching the Olympics can inspire average Joes to get off the couch, yoga competitions can boost the practice’s visibility and encourage people to try it or to practice more often, Basinger says.

“As a spectator, it’s pretty awe-inspiring, and most people who go to a yoga championship are inspired to do yoga and improve their own practice,” she says. That’s “only positive,” she says, since yoga will make you – and, in effect, the people around you – feel better.

Con: They can detract from yoga’s true purpose.

For Kudrik, competitions’ focus on appearance dismisses the fact that form is only a small facet of the practice of yoga, which is as much about how you move through life off the mat as on. “Yoga is supposed to be a process of self-exploration, rather than one that’s done for show,” she says. “It’s supposed to help with self-discovery and self-inquiry, which is really hard when you put it in a competitive landscape.” The idea of performing in front of judges doesn’t sit well with her either. “The fact that someone external is judging you is very far away from the nature of what practice is meant to be,” she says.

But even judging judgment isn’t very zen, argues David Lipsius, CEO of the Kripalu Center for Yoga & Health in Stockbridge, Massachusetts. “The real question is not whether yoga competitions are legitimate yoga,” he says. “The real question is whether yogis can stop competing with each other over who is legitimate, better, ‘real’ or more evolved.”

If you’re considering competing, keep in mind what your goal is, Pline advises. If it’s about landing a pose so you can post a photo on Instagram, take a step back and focus on how your practice has improved – not how it matches up to a social media star, she says. If it’s about committing to a deeper practice, seek the proper training to avoid injuries. According to Baisinger, “there’s a lot to be gained in your personal development – mentally and physically and even spiritually.” There’s just one caveat: “If you have your mind in the right place.”