Pilates evolves to work for every body

Pilates evolves to work for every body

Pilates has grown from wartime origins to a fitness method that now works for dancers, athletes, pregnant women, the disabled and more. Teachers at a recent conference reflect the range of clients. 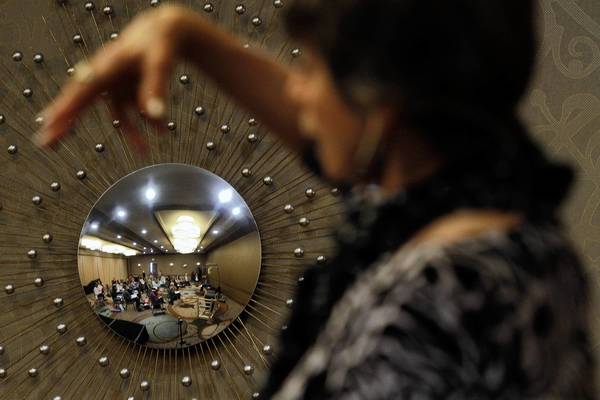 At a conference at a Newport Beach hotel, more than 250 teachers from around the globe learned how to refine exercises, target particular muscles and work with people who have injuries.

“The brilliance of Pilates is how it helps you with your daily living,” says Lolita San Miguel, one of the stars of the conference. She studied with Joseph Pilates and has practiced his fitness method for more than five decades. Graceful and flexible at 79, she still teaches in Florida, where she lives.

In her seminar about teaching Pilates to older people, she emphasized empathy toward students’ lives as much as working on how to get up if they fall. “Fear is part and parcel of aging, the fear of losing your freedom,” she said.

San Miguel is one of a growing number of teachers using Pilates — once considered the province of ballerinas and stay-at-home moms— to work with the elderly and the disabled. Focusing less on tight abs and toned glutes, these classes target specific muscle groups that allow for increased mobility, greater mind-body awareness and overall improved quality of life.

It’s not a far cry from Pilates’ beginnings. Joseph Pilates, who died in 1967, began teaching exercises to others interned with him as German nationals in England during World War I. Some of his methods evolved from using hospital beds and traction equipment to work with injured people during the war. Pilates later moved to New York, and many dancers became fans of his method.

Now, Rael Isacowitz, founder of BASI Pilates (Body Arts and Science International), which sponsored the conference a few months ago to celebrate its 25th birthday, estimates that 10 million to 12 million people in the U.S. practice Pilates. His BASI method, which includes use of equipment he has developed, has spread to 27 countries, he says.

“People were tired of the “no pain, no gain” aerobics revolution of jumping around and pushing, pushing,” says Isacowitz, who is trained in dance and exercise physiology. “Pilates is far more aligned with an approach like yoga, a mind-body system.”

And as more people recognize the benefits of that system, Pilates reaches those who may once have considered the practice far out of their realm of possibility.

Pregnant women have specific needs when it comes to strength and stamina, says Patte James, the owner of West LA Pilates. Pilates can help strengthen muscles that will assist in giving birth, as well as in recovery afterward. James runs classes that are targeted to pregnant women, and she notes that certain exercises can build the pelvic floor muscles and the transverse abdominals, all of which are used during labor.

According to the American Pregnancy Assn., strengthening the pelvic floor muscles, or Kegel muscles, can assist during labor and can also help with bladder control and hemorrhoids, both of which can be aggravated during pregnancy.

To that end, James focuses on such movements as working with the heels on an exercise ball and doing leg lifts, stomach work and hip strengthening.

Additionally, Pilates can be used to strengthen the upper back, which comes in handy once the baby is born, James says. “They’re going to be holding a baby that gets heavier and heavier quicker and quicker.”

Pilates for the disabled

For physically disabled individuals, finding the right kind of exercise can be daunting. But, according to Trent McIntyre, president of the board of directors of the Pilates Method Alliance, working out with a Pilates trainer can isolate muscles and provide body awareness that other exercises can’t.

“If you compare it against traditional exercise, they don’t have the ability to address the whole body functions, which we do as Pilates instructors,” McIntyre says.

To wit, working out on Pilates machines, such as the reformer and the Cadillac, allow the body to target very specific — and often underused — muscle groups. McIntyre uses this philosophy when working with individuals who have injuries or illnesses, such as spinal trauma or Parkinson’s, and giving them the ability to home in on the exact areas of the body that need strengthening.

Also at play in working with disabled clients is the fact that in Pilates, the isolated movements require a higher level of concentration than other exercises might. That means a neurological benefit.

“The change happens in the brain about the neurology of their movement,” says McIntyre. “When they have patterns that don’t help them walk well or that cause pain and interrupt quality of life, they can improve the way the mind and body function so they don’t have these everyday interruptions.”

Children might not be the first group that springs to mind when it comes to exercises that focus on holding positions and targeting small muscle groups. But Melanie Archer-Dieveney, the owner of Archer Pilates in West Los Angeles, says that kids can reap the benefits of strengthening their cores and staying physically active.

“They become very aware of their core, that that’s their center and where their power and their strength come from,” she says.

Pilates can also help children gain good posture and good breathing technique, which Archer-Dieveney notes will translate into other activities and help them stay strong throughout the day.

But perhaps more important, keeping kids in classes like Pilates serves as a reminder of the value of physical activity and reinforces the habit of keeping activity a regular part of their daily routines.

Children are too small to use Pilates machines, so Archer-Dieveney’s class focuses on mat work and incorporates balls and rings to keep kids engaged. And while they might not have the muscle memory of an adult, what they learn nevertheless sticks with them.

“My daughter sits up taller; it changes the way they hold their bodies,” says Archer-Dieveney. “They can incorporate it into their life.”

Pilates for the elderly

Risa Sheppard, who owns Sheppard Method Pilates in Los Angeles, says Pilates can be used to regain strength and flexibility, both of which are key to healthy aging.

“If there isn’t flexibility or moving from correct place, a shoulder can go out, a hip can go out,” she says, and “if you’re not flexible in your sockets, that’s when you can trip. Balance is very important to seniors.”

To facilitate strength and flexibility, Sheppard emphasizes movements that strengthen the core muscles but that don’t place a great amount of strain on the joints. Seniors may incorporate workouts that begin from a seated position, or even lying down. Healthy spines are crucial for good living in the golden years as well, a part of the body that Pilates benefits. A strong back and spine allow for better overall strength and also open the chest to improve breathing and help a person refrain from hunching over. Improved breathing, in turn, affects the amount of energy an older person has.

The goal of Pilates for the elderly, says Sheppard, is for seniors to become as self-reliant as possible.

“It’s easier to pick things up, pick up grandchildren, do all of life’s tasks” with a stronger body, she says. “Ideally you want live life as pain-free and carefree as possible, and the better shape you’re in, then the greater you’re able to walk and to perform simple tasks.”