Would you like to switch to the accessible version of this site?

Don't need the accessible version of this site?

Come to one of our Tuesday or Thursday morning Zumba classes and experience the fun of Zumba.

In Zumba exercise classes, it’s all about feeling the music. 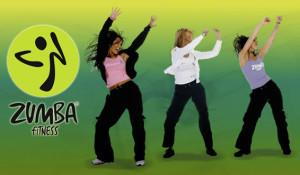 Latin rhythms pulse from Pittsburgh’s Club One aerobics studio, where Maria McCalister leads a Zumba class packed with the glistening bodies of nearly 50 people seeking to swivel, pivot, and shake their way to fitness.

McCalister coaches her students to feel the music, be it salsa, meringue, or flamenco. “I don’t talk much,” she says. “I let the music move them and inspire them.”

Zumba, an aerobic dance class set to South American beats, is hot in health clubs and exercise studios from Miami to Los Angeles and everywhere in between.

“Latin music just tends to make you feel happy and good,” says McCalister, 53. “I can have the bluest day, be depressed, hormones ranging, whatever, and get in front of that class, turn on the music and I recharge my life, my soul.”

Adds McCalister: “When I put on Traigo Una Pena, a cha cha, my class just screams. They’re somewhere else; they’re not in Pittsburgh when they take a Zumba class.”

That’s exactly what creators were aiming for when they released Zumba (Spanish slang for buzz like a bee or move fast) to the world.

The Growth of Zumba

Zumba was born from an accident. Colombia-born Alberto “Beto” Perez was teaching an aerobics class in his native Cali in 1986 and discovered he had forgotten his usual music. So he dug through his bag of tapes and grabbed a mix of salsa and meringue music he personally liked to dance to.

“I just said, ‘Class today is different,'” says Perez, 37, who was also a dance instructor. “Everybody loved it.”

Zumba’s success grew steadily after Perez moved first to Bogota, Colombia and later to Miami. In 1999, Perlman and entrepreneur Alberto Aghion approached Perez about taking Zumba to the mass market. The three began selling DVDs via infomercial in 2002 and were very successful, but enthusiasts demanded more.

“The crazy thing was we were getting all these people from all around the country who bought these videos and wanted to teach it,” says Perlman.

In 2005, Perez, Perlman, and Aghion developed an educational division, wrote a training manual, and began offering Zumba workshops to those interested in teaching.

Today, there are an estimated 4 million Zumba enthusiasts and 25,000 instructors in 40 countries, according to Perlman. And Zumba executives continue to feed the frenzy. The brand also offers music and choreography; a clothing line; Zumba Gold classes, geared to seniors; Zumba Toning, a sculpting class using weighted sticks that sound like maracas; and ZumbAtomic, a program for kids aged 5 to 12.

Barring any doctor’s limitations, says Perlman, Zumba is safe for a range of ages and fitness levels because the steps can be modified so that it’s very low-impact. And all you need are a good pair of dance shoes or cross-trainers.

Part of Zumba’s appeal is its simplicity, says Perlman. Teachers are encouraged to forego complex cueing, and just let the students feel the music, he says.

“Other classes do complicated choreography. … You need to pay attention,” he says. “Zumba uses four or five steps in one given song and you keep repeating.”

And, Bogan says, she’s not alone in feeling that way: “When I look around at the faces of these middle-aged to older adults, their faces are like the faces of children on the playground.”

“It changes your body better than body sculpting,” says McCalister. “Since I’ve started teaching Zumba, I’ve lost inches. My body has slimmed down. I’ve had to replace all my fitness clothes.”

Though Bogan says she’s always been a “gym rat,” she admits to being uncoordinated. “I never had great balance,” but since practicing Zumba, she says, “I can stand on one foot as long as I need to.”

Bogan says learning the new dances is great mental exercise, as well: “I’d rather do this than Suduko.”

“It’s a decent cardio workout as long as you’re OK with letting yourself go,” says Gunning. “You have to be uninhibited to get the most benefit out of the workout.”

Perez says Zumba fanatics come for more than the calorie burn, however.

“Zumba is more of a philosophy,” says Perez. “Sometimes people go for therapy, sometimes they go for social connections, sometimes they love to dance and there’s no time. Zumba is the perfect excuse.”