Would you like to switch to the accessible version of this site?

Don't need the accessible version of this site?

Do Real Men Do Pilates?

Do Real Men Do Pilates? 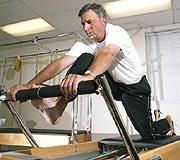 Despite the explosive growth of Pilates in recent years, there seems to be amisconception among men that Pilates is only for women. I have to admit that women have been the first to adopt it in masses, but Pilates is just as beneficial for men as it is for women. Pilates is not, and never was a gender thing. As a matter of fact, Pilates was developed by a man who was a boxer, gymnast, and circus performer and had a following of male practitioners.

When men try Pilates for the first time they are surprised to find out that Pilates is not easy. Jack Cohn, a CEO of a commercial production company who took on Pilates to deal with back injuries, was marveled by the difficulty and the athleticism required by the Pilates method. His trainer Regina Joseph in an article in Pilates Style magazine shares what Jack whispered to her at one point; “Boy, I’d never expected it to be this tough. I always thought Pilates was… you know, kind of girly.”

Many physiotherapist, doctors and sport coaches agree that based on men’s biomechanical and physical needs they could benefit from Pilates more than women. The reason is simple.

The Pilates method core strengthening and stretching principles are a great way to regain the flexibility and treat many of the injuries and misalignments and bad habits that men frequently impose on themselves.