A few years ago, Katy Bowman kicked up a dust storm when she offered not the standard “do your kegels” for a strong pelvic floor (PF), but this following advice:

A Kegel attempts to strengthen the pelvic floor, but it really only continues to pull the sacrum inward promoting even more weakness, and more PF gripping. The muscles that balance out the anterior pull on the sacrum are the glutes. A lack of glutes (having no butt) is what makes this group so much more susceptible to pelvic floor disorder (PFD). Zero lumbar curvature (missing the little curve at the small of the back) is the most telling sign that the pelvic floor is beginning to weaken. An easier way to say this is: Weak glutes + too many Kegels = PFD.

Katy’s recommendation? Developing an (eventual) deep squatting habit (picture going to the bathroom while camping) to create the posterior pull on the sacrum and balance the work of the pelvic floor.

If you’ve read a lot of mainstream books about the pelvic floor, you’ll know why this assertion is still shocking today. When it comes to prenatal exercise, for example, Kegels are usually placed on the first place podium due to their effects on pelvic floor strength. But do they really strengthen the pelvic floor in the long run?

Katy (who is nearing the end of her own second pregnancy – that’s her in the picture to the right) was kind enough to answer some questions for me about this important issue. She shared a bit about how she first discovered the relation between Kegels and PFD:

In graduate school (where I was getting my MS in Biomechanics) I focused my studies on “where pelvic floor disorders come from.” I found this important because in math and engineering fields, where I came from, you can’t work on a problem’s solution until the problem is well defined. In disease research, however, there isn’t really research into the why or the how – only on trying to figure out the remedy. In doing my research on the physics of the pelvis, movement, and how the pelvic floor works, it became clear that while the pelvic floor’s problem was weakness, it was weakness that is the result of too much tension – not weakness that comes from flopping around.

Underlying the Kegel controversy is a very simple issue: what Katy calls an “overgeneralized theory of strength.” A Kegel is a muscular contraction. For women who have a tight pelvic floor, concentrically contracting the muscles regularly will simply aggravate the tension issue. “Muscle that is either too long or too short looks the same when you measure its force production. Which means just because something is weak or unable to do a bout of work does not automatically imply that concentric contraction is the correct prescription.” 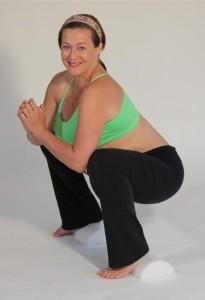 “Squat 300 times a day, you’re going to give birth quickly.” – Ina May Gaskin

Never does pelvic floor strength seem so important as during pregnancy. How can pregnant women strengthen their pelvic floor without that daily Kegel checklist? By doing exercises that lengthen the pelvic floor and increasing their own awareness of pelvic alignment. Katy explained, “It’s the alignment of the pelvis and sacrum that gets out of whack, so knowing where your pelvis should be as you move throughout the day (sitting, standing and walking), done in conjunction with a few daily squats (get a squatty potty and this doesn’t even require extra time!) will get the full restorative effect your pelvic floor needs.”

And this brings me to that lovely little exercise known as the squat. Really the squat isn’t an exercise at all, but a basic human movement that we used to do all the time. Three hundred times is a little extreme, but regular squats will definitely help lengthen the pelvic floor. I’m not even talking about weighted squats here. If you have other small children running around during your pregnancy, you are probably getting in your squats already, as long as you’re doing them correctly.

So how do you do them correctly? Here are a few tips from Katy:

Joint Positioning: “Because the squat we are after is really a gluteal-using one, whole-body joint positioning is essential. To get a squat to move from the front of the body (think all quads) to the back (think all glutes) is by using SHIN position. The more vertical the shin (that’s the knee joint stacked over the ankle joint) and the more untucked the pelvis, the more glutes you’ll use. The more the knees are in front of the ankle and the more tucked the pelvis, the less glutes you’ll use.”

Depth of the Squat: “How far you go down will be based on how well you can keep the shin and the pelvis where you want them. Most people who have not squatted to use the bathroom throughout a lifetime will find the range of motion of their ‘glute squat’ to be fairly small. Which is fine. It will improve over time, especially if you’re working on changing the habits of where you hold your pelvis throughout the day.”

Length: “The amount of time you spend in a squat also depends. The glute action is primarily used on the way up – however lingering in a squat, especially if you can kind of relax, helps the muscles and involved joints change their tension patterns. Seriously. Doing a potty-squat gives you a more natural, real-world relationship with your squat.”

“…all women are not accustomed to being delivered in the same posture; some will be on their Knees, as many in the Country Villages; others standing upright leaning with the Elbows on a Pillow on the Table…but the best and surest is to be delivered in their bed, to shun the inconvenience and trouble of being carried thither afterwards…” – Francois Mauriceau

No article on squatting during pregnancy would be complete without some reference to squatting during labor, so let’s not ignore the elephant in the room. During my second pregnancy, my husband and I took a childbirth preparation class (we were hoping for a VBAC), where we watched one of those crazy videos about the tribal women squatting out a baby like it was no big deal. Definitely left an impression. 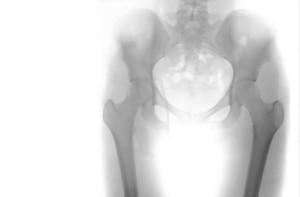 I asked Katy what she thought of the squatting position during labor. “I think squatting during delivery is awesome. It’s kind of like a DUH when you consider gravity and the fact that you want it out (out! out!) I also encourage people to remember that delivery is a huge physical performance. Prepare for it, with lots of walking, working on pelvic alignment, and releasing the hips, sacrum and those pelvic floor muscles – which will make them stronger, as weird as that seems.”

And there’s another elephant in the room that you might not have noticed. Just for the record, all this pelvic floor stuff isn’t just for pregnant women. It’s not even just for women. If you’ve ever heard people say pregnancy causes PFD, don’t believe it. Katy’s reaction to this assertion was quite adamant:

No, pregnancy does not cause PFD. Can I say that again? NO, PREGNANCY DOES NOT CAUSE PFD. How do I know? Because research shows that the category of ailments that fall into PFD occur equally in women who have and who have not delivered babies. There are also women who have had 10 or 12 kids who have no pelvic floor issues. And, P.S., Pelvic Floor Disorder in men is also extremely prevalent and on the rise. So dudes, you gotta read this info as well. Read it, and then talk about it with other dudes. While you’re squatting, of course.

To learn more about the pelvic floor, check out Katy’s new app, Down There For Women.